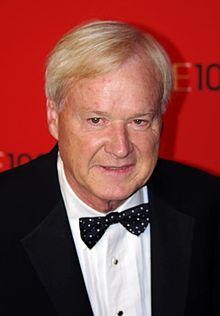 Bio: Christopher John Chris Matthews is an American political commentator and news anchor known for his nightly hourlong talk show Hardball with Chris Matthews which is televised on the American cable television channel MSNBC. From 2002 to 2013 he hosted a syndicated NBC Newsproduced panel discussion program on weekends titled The Chris Matthews Show.

Are you a Fan of Chris Matthews? Upload an Image Here
Comments