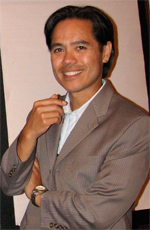 Bio: Evan Tlesla Ã?dams is a Canadian actor, playwright and medical doctor. A Coast Salish from the Sliammon First Nation near Powell River, British Columbia, he is best known internationally for his roles in the films of Sherman Alexie, as Thomas Builds-the-Fire in the 1998 film Smoke Signals and Seymour Polatkin in the 2002 film The Business of Fancydancing.

Are you a Fan of Evan Adams? Upload an Image Here
Comments