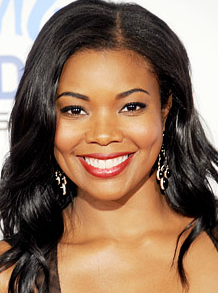 Bio: Gabrielle Monique Union is an American actress and former model. Among her notable roles is as the cheerleader opposite Kirsten Dunst in the film Bring It On. Union starred opposite Will Smith and Martin Lawrence in the blockbuster film Bad Boys II and played a medical doctor in the CBS drama series City of Angels.

Are you a Fan of Gabrielle Union? Upload an Image Here