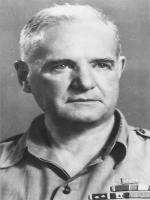 Bio: Georgia Cozzini was an American socialist politician. She is best remembered as the first woman to run for Governor of Wisconsin and for two consecutive runs as the Vice Presidential candidate of the Socialist Labor Party of America, appearing on the ballot in 1956 and 1960.

Are you a Fan of Georgia Cozzini? Upload an Image Here
Comments