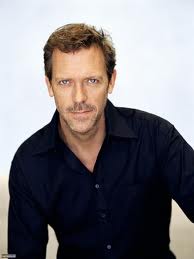 Bio: James Hugh Calum Laurie is an English actor, comedian, writer, musician, and director. He first became known as one-half of the Fry and Laurie double act, along with his friend and comedy partner Stephen Fry, whom he joined in the cast of A Bit of Fry & Laurie, Blackadder, and Jeeves and Wooster from 1985 to 1999.

Are you a Fan of Hugh Laurie? Upload an Image Here
Comments