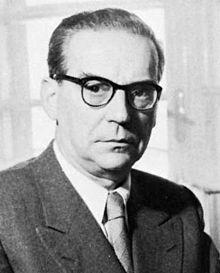 Bio: Ivan "Ivo" AndriÄ? was a Yugoslav novelist, short story writer, and the 1961 winner of the Nobel Prize in Literature. His writings dealt mainly with life in his native Bosnia under the Ottoman Empire.

Posted In: Actors, Famous People Of Bosnia And Herzegovina

Are you a Fan of Ivo Andric? Upload an Image Here
Comments