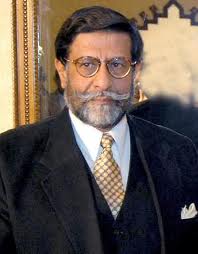 Bio: Muhammad Mian Soomro(born August 19, 1950) is a Pakistani politician who has been the Chairman of the Senate of Pakistan since 2003.He was the 16th Prime Minister of Pakistan from November 16, 2007 to March 25, 2008 and became the Acting President of Pakistan upon the resignation of Pervez Musharraf on August 18, 2008.

Are you a Fan of Muhammad Mian Soomro? Upload an Image Here
Comments