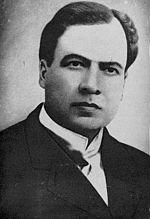 Bio: Flix Rubn Garca Sarmiento known as Rubn Daro was a Nicaraguan poet who initiated the SpanishAmerican literary movement known as modernismo modernism that flourished at the end of the 19th century. Daro has had a great and lasting influence on 20thcentury Spanish literature and journalism.

Are you a Fan of RubÃ©n DarÃ­o? Upload an Image Here
Comments