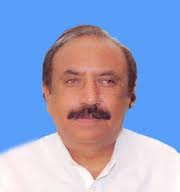 Bio: Sabir Ali Baloch was born on October 05, 1945 in Quetta Balochistan,Pakistan.He is the member of Pakistan Peoples Party and had been three times Member of the Provincial Assembly of Balochistan. He is appointed as Deputy Chairman of Senate by President Asif Ali Zardari.

Are you a Fan of Sabir Ali Baloch? Upload an Image Here
Comments