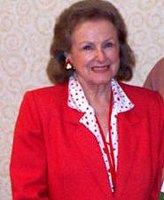 Bio: Theodora Nathalia "Tonie" Nathan was an American political figure. She is the first woman, as well as the first Jewish person, to have received an electoral vote in a United States presidential election.

Are you a Fan of Tonie Nathan? Upload an Image Here
Comments