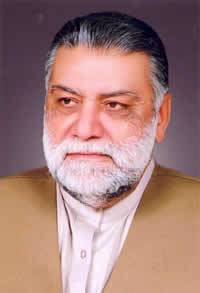 Bio: Mir Zafarullah Khan Jamali (born January 1, 1944) is a former Prime Minister of Pakistan and former Chairman of the Pakistan Hockey Federation. Originally a supporter of Pakistan Peoples Party,Jamali emerged in the politics of Balochistan Province in the 1970s, under military governor Rahimuddin Khan and currently he has been elected as a MNA on party ticket of PML(N).

Are you a Fan of Zafarullah Khan Jamali? Upload an Image Here
Comments