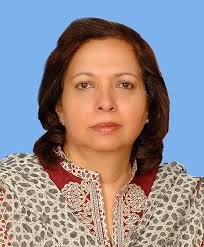 Bio: Munaza Hassan was daughter ,was born on December 25, 1966 in Lahore, Punjab, Pakistan.She is a Pakistani politician who currently presides over women wing of PTI.

Are you a Fan of Munaza Hassan? Upload an Image Here
Comments