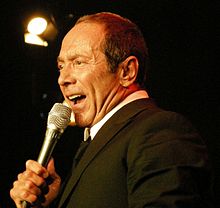 Bio: Paul Albert Anka, OC is a Canadian singer, songwriter and actor. Anka became famous in the late 1950s and 1960s with hit songs like "Diana", "Lonely Boy", and "Put Your Head on My Shoulder". He went on to write such well-known music as the theme for The Tonight Show Starring Johnny Carson and one of Tom Jones' biggest hits, "She's a Lady", and the English lyrics for Frank Sinatra's signature song, "My Way" .

Are you a Fan of Paul Anka? Upload an Image Here
Comments