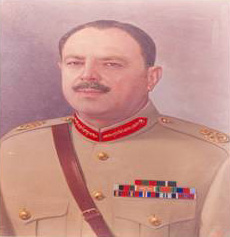 Bio: Mohammad Ayub Khan was born on May 14, 1907, in Rehana, Hazara, India. After the partition, he was made commander-in-chief of the army of Pakistan. was a five-star general officer and statesman, serving as the second President of Pakistan and its first military dictator from 1958 until his forced resignation in 1969.

Are you a Fan of Ayub Khan (field marshal)? Upload an Image Here
Comments