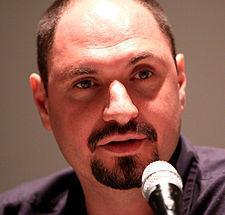 Bio: Loren Hal Bouchard is an American cartoonist, animator, voice actor, screenwriter, producer, television director, and composer. He is best known for several animated TV shows and as a co-creator of Home Movies.

Are you a Fan of Loren Bouchard? Upload an Image Here
Comments