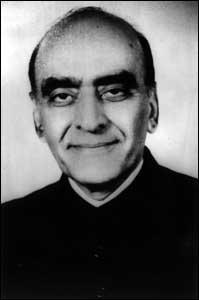 Bio: Moeenuddin Ahmad Qureshi, usually referred to as Moeen Qureshi, (born 1930) is a Pakistani economist and political figure. A former Vice President of the World Bank, he was the acting Prime Minister of Pakistan from July 18, 1993 until 19 October, 1993.

Are you a Fan of Moeenuddin Ahmad Qureshi? Upload an Image Here
Comments