Umesh Yadav: I was practicing with Anil (Kumble) and Sanjay (Bangar) about what my line and length should be in the practice sessions. The hard work that I have done in the last six months has been paying off now. That is very important on such wickets. I was trying to bowl very tight lines on this wicket and hope for the batsmen to make mistakes. I was trying to minimise the bad balls and the scoring opportunities. I knew if they go for their shots they would play the false stroke and I would be helped by the reverse to get wickets. (On Warner's wicket) My spell started late and I knew that the ball was moving around quite a bit. I tried to get it much fuller to him and prevent him from freeing his arms. That is exactly what I wanted. (On Saha's catch) When someone takes a catch like the one Saha took, it helps a bowler immensely. There are very few catches of this kind that are taken because the ball was moving very fast. Hats off to him to take that and he showed that he has the capability to take such catches. 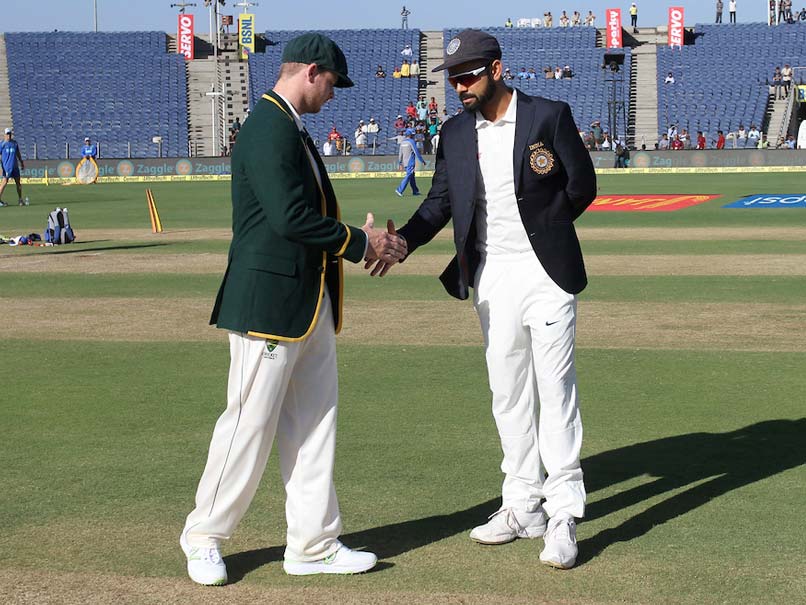 16:28 IST: Ishant Sharma to bowl the last over of the day

16:18 IST: These are all bonus runs for Australia and the last wicket partnership has already reached 47 off 56 balls

16:14 IST: FOUR!! Starc pulls it towards the fine-leg and reaches his 9th Test fifty. What a brilliant cameo he is playing

16:06 IST: SIX!!! Starc goes big again and hits it for a maximum. He has quickly accumulated runs to reach to 43

16:00 IST: SIX!! The ball sailed over long-on for a maximum. Good shot by Mitchell Starc off Jayant Yadav

15:52 IST: Good bouncer by Umesh Yadav. Intimidating delivery by him.

15:46 IST: Australia are in big-big trouble now. Umesh Yadav has bowled brilliantly for his 4 wickets and deserves the fifth one.

15:51 IST: Appeal again for an LBW and the umpire raises his finger. Nathon Lyon goes for the review and third umpire stays with the decision. Australia 205/9

15:40 IST: OUT!!! Annnddd Wriddhiman Saha takes it. What a lovely, gorgeous catch by the wicket keeper. He dived full length to take Steve O'Keefe's edge

15:12 IST: Mitchell Starc is the new man in for Australia.

15:08 IST: APPEAL for an LBW by Umesh Yadav!!! Umpire raises his finger but hang on!! Mathew Wade goes for a review

15:01 IST: FOUR!! Steps out and hits a straight boundary. Renshaw is growing in confidence now

14:55 IST: FOUR!!! Matt Renshaw comes down the track and smashes Jayant Yadav for a boundary

14:49 IST: FIFTY! That's Matt Renshaw's second Test fifty. The left-hander has shown great character in this innings. He needs to get a big one for Australia now.

Fast bowler has just taken 4 wickets and opened up the game for India! https://t.co/5cX2PF32ck 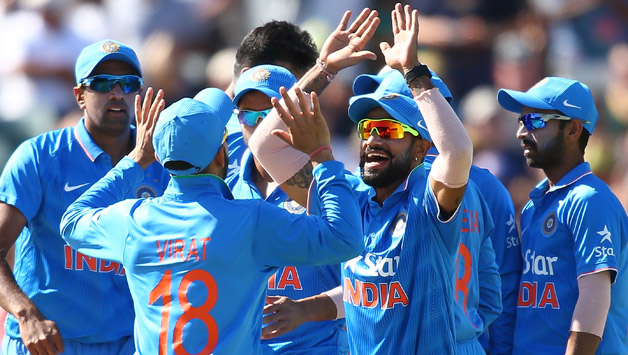 Australia scored 69 runs in the session. They are 153/4 in 63 overs. Matt Renshaw 38*, Mitchell Marsh 2*. India came back strongly and took 3 wickets in the session

14:02 IST: REVIEW!! Not-out given by the third umpire and Marsh survives

14:00 IST: Appeal for a caught behind!!! The umpire gives it out but Mitchell Marsh goes for a review

13:58 IST: OUT!! Double blow for Australia and a straight forward chance for Virat Kohli at mid-on. Australian captain Steve Smith departs for 27 as Ravichandran Ashwin strikes this time.

13:57 IST: Matt Renshaw comes back to the crease now. It will not be easy for him

13:55 IST: OUT!!! Big appeal for an LBW and umpire raises his finger. It was plumb in front and Peter Handscomb, after a good innings, departs on 22

13:50 IST: Australia have scored 64 runs in the session so far and lost one wicket

13:47 IST: Matt Renshaw is padded up and will come into bat next

13:37 IST: FOUR!! Through the mid-wicket area this time and back to back boundaries for Peter Handscomb

13:35 IST: FOUR!! That's a poor ball from R Ashwin. Only two men on the off-side and he dishes out a half-volley. Predictably, gets punished

13:17 IST: If India get one more wicket here then Australia will be under tremendous pressure

13:14 IST: Ishant Sharma comes back into the attack

13:04 IST: FOUR!! Peter Handscomb, the new batsman, glances it down the leg side for a boundary

12:47 IST: FOUR!! Jayant Yadav drops it short Marsh uses the pace on the ball and cuts it late for a boundary

12:45 IST: FOUR!! A long-hop by Ravindra Jadeja and Smith smashes it for a boundary

12:37 IST: It was Wriddhiman Saha who had suggested for the review and he got it wrong on both the occasions

12:33 IST: REVIEW!! Virat Kohli goes for the review and the third umpire stays with the not-out decision. India have lost both their reviews now

12:32 IST: Wrapped on the pads as Umesh Yadav appeals for an LBW. Not-out given by the umpire

12:31 IST: FOUR!! Umesh goes down the leg side and Smith gets his front leg out of the way for a boundary towards the deep fine-leg

12:30 IST: Australia have certainly done a great deal of homework. They have looked to play straight and have made full use of the poor deliveries.

12:28 IST: 100 up for Australia. It has been a wonderful start by the visitors. Renshaw and Warner provided a good platform and these two are taking it forward

12:24 IST: FOUR!! Length delivery on the pads and too easy for Shaun Marsh. Poor delivery by Umesh Yadav

12:20 IST: No ball!! This time by Ravindra Jadeja. India have bowled three today.

12:16 IST: FOUR!! Hit on the up by Shaun Marsh off Umesh Yadav. Not an easy shot to hit on this pitch

12:10 IST: Welcome back after the lunch. It has been a great start for the visitors, losing just one wicket for 84 runs. Jadeja to start the proceedings

11:19 IST: So, two new batsmen at the crease now. Steve Smith and Shaun Marsh. Even God is with Indians

11:17 IST: And a bit of drama here!! Shaun Marsh also comes into the middle for Matt Renshaw. Not too sure why he left the field.

11:15 IST: So, Steve Smith comes to the crease just 15 minutes before Lunch, last thing he would have wanted

11:11 IST: OUT!! Inside edge onto the stumps and Umesh Yadav provides first breakthrough to the hosts. Warner out on 38

11:10 IST: Umesh Yadav comes into the attack and starts with a big no-ball

There are several factors in India's stupendous run, chief among those being captain Virat Kohli's phenomenal run with the bat. The young captain has truly led from the front by notching up four double hundreds.

Kohli is averaging over 80 after accumulating 1457 runs in the last 13 Tests and Australia will need to find ways to curtail his brilliance to stop the Indian Juggernaut.

The other major factor has been the excellent bowling by spinners Ravichandran Ashwin and Ravindra Jadeja, incidentally the top two bowlers in the ICC rankings.

Off-spinner Ashwin has grabbed 78 wickets in 13 games during the same period with 8 five-fors at an average of just over 24 while left-armer Jadeja has scalped 49 wickets in 10 Tests at just under 25.

It will be interesting to see whether the Pune track offers some turn for spinners on the opening day, with Australian skipper Steve Smith having said that the pitch will offer turn right from Day 1.