UFC officials announced the winners after the event, which MMAjunkie attended.

Souza (24-4 MMA, 7-1 UFC) took Tim Boetsch (20-11 MMA, 11-10 UFC) down midway through their middleweight fight on the pay-per-view main card. Then he took Boetsch’s left arm with relative ease, and soon he had a kimura locked in that forced Boetsch to tap. With the win, he continued to assert himself as a top contender for the 185-pound title.

In what was a close matchup that Brunson seemed to get the better of, the judges scored it a unanimous decision victory for Silva, much to the delight of the fans in attendance. One could make an argument for the 29-28 scorecards, as Silva did land consistently throughout the fight and was never rocked, but 30-27 is a hard sell.

Brunson landed a lot more volume than Silva, particularly in the clinch, but did have a lot of his punches rolled or shrugged off by the former middleweight champ. After landing a late takedown and finishing Round 3 on top, it certainly looked as though Brunson had tipped the scales in his favor.

Ultimately, though, it was Silva who came away with his hand raised. It wasn't the type of win that's going to merit an immediate title shot, but "The Spider" has certainly positioned himself for a marquee matchup at 185 pounds. Perhaps Luke Rockhold when he's healthy enough to return, or the winner of Chris Weidman vs. Gegard Mousasi. 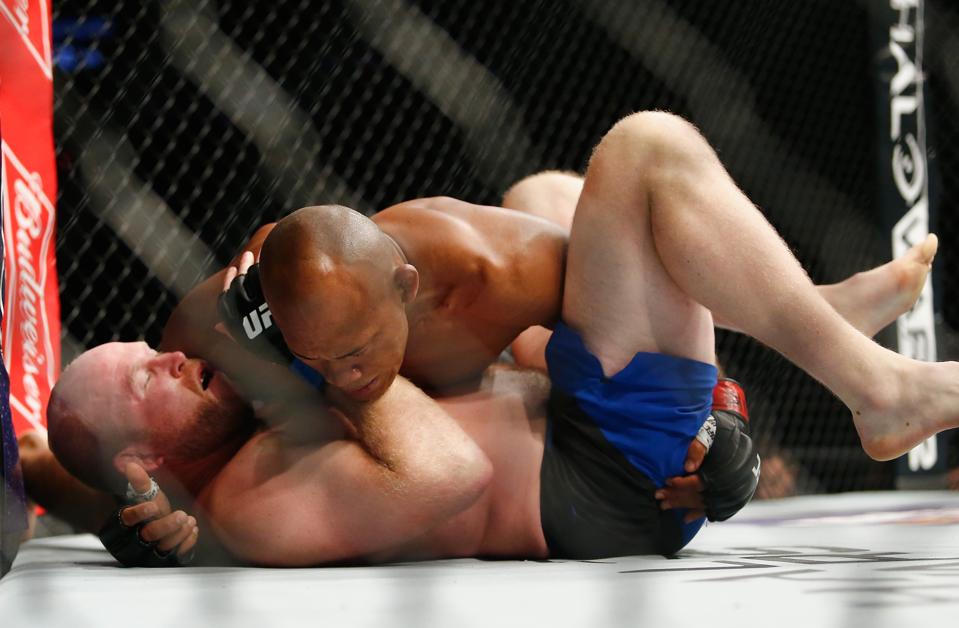 Well, that didn't take long. After a few minutes of feeling each other out, Jacare got Boetsch down on the second takedown he attempted, swiftly secured mount and locked in a fight-ending kimura 3:41 into the first round.

It's going to be hard to deny the Brazilian the next shot at the middleweight title after a performance like this, even if "The Barbarian" isn't all that high up in the UFC's rankings at 185 pounds.

It will be interesting to see where Boetsch, who is now a free agent, will go from here given the UFC's recent trend of letting second-tier veteran contenders walk.

Though he was hit hard a couple times, Teixeira turned in a dominant performance over the up-and-coming Cannonier, suffocating the American with his superior grappling skills in Rounds 2 and 3.

The crowd really let the Brazilian hear it whenever he stalled the action on the mat, which is understandable considering this fight followed the action-packed Poirier vs. Miller fight. Credit Glover for tuning out the boo birds and sticking to his game plan. 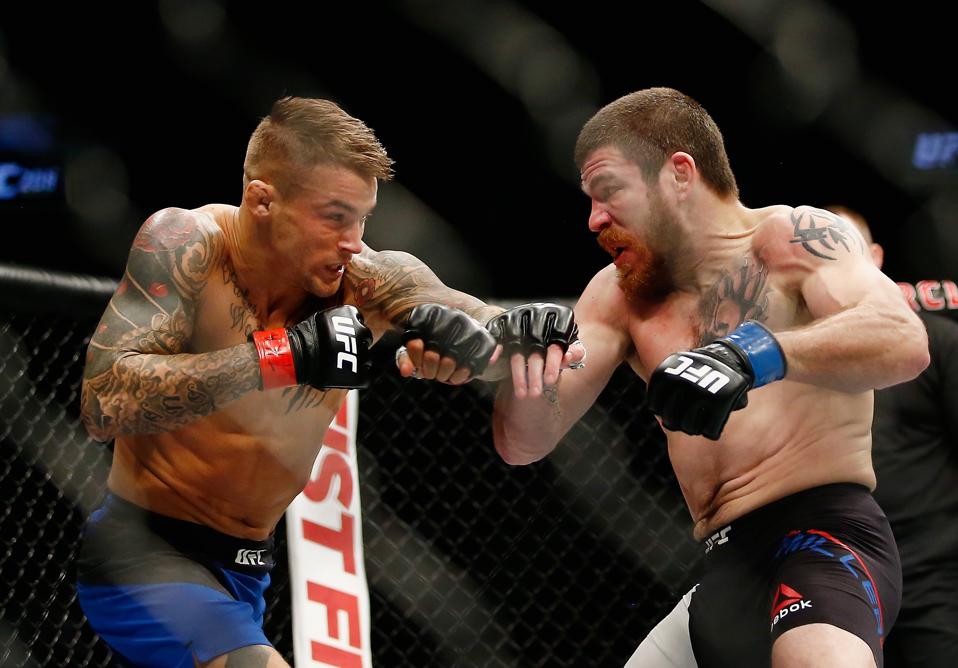 Is it too early to call Fight of the Night?

Poirier and Miller, a New Jersey native, engaged in all out-war that received a huge pop from the crowd at the Barclays Center. Poirier got the better of most of the stand-up exchanges, and secured a takedown at the end of the second and third rounds to help solidify the W.

Despite coming up short, Miller deserves a ton of credit for the toughness he displayed throughout the bout. I think it's safe to say that he's back to his old self despite an ongoing battle with Lyme disease.

Poirier had to be helped out of the cage after his interview with Joe Rogan. It appears that he sustained a serious injury to his right shin. 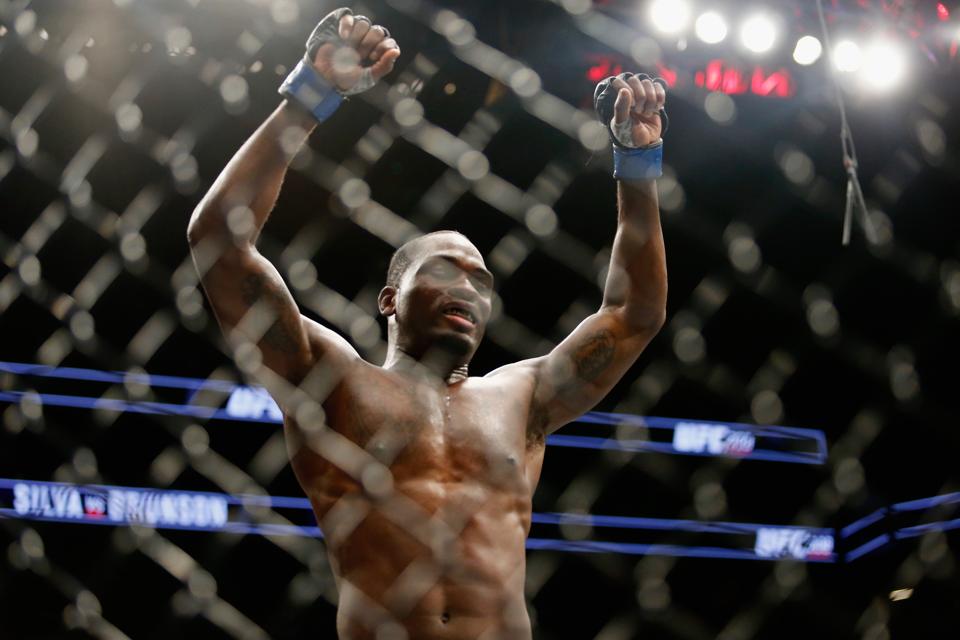 -Only three $50,000 bonuses were handed out by the UFC tonight, as all but one fight went to a decision. Jacare received a Performance of the Night bonus while Poirier and Miller took home Fight of the Night honors. The official gate total is $2,275,105 with an attendance of 15,628.

-It appears Cyborg is eyeing a different opponent at 145 pounds if Germaine de Randamie is forced to miss time after hand surgery. Cyborg is currently seeking a USADA exemption following her positive drug test in December.

-Derek Brunson has already taken to social media to dispute his controversial decision loss to Anderson Silva (read more on that below). His words: "‪Wow unreal I put my heart & soul out there on 3 weeks notice only to get it taken from me. I just outclassed the greatest of all time."

-Dominick Cruz will be calling the next UFC pay-per-view alongside Joe Rogan and likely Jon Anik.

-Nice tribute to the local crowd by Derek Bruson, who walks out to Juicy by The Notorious B.I.G. Anderson Silva, for the first time in his UFC career, makes his walk without DMX's "Ain't No Sunshine." Instead, he's going with a single produced by his son Kalyl.

-The UFC has announced that fan favorite Diego Sanchez will face a returning Al Iaquinta on the Swanson vs. Lobov Fight Night card.

-A lot of Mike Goldberg soundbites in the video package created for the main card — still feels strange not having Goldie in the booth. With that said, the three-headed monster of Jon Anik, Joe Rogan and Daniel Cormier have sounded pretty good from what I've managed to catch.

-Three big-time fights were announced during the preliminary card: Michelle Waterson vs. Rose Namajunas (UFC on Fox 24 on April 15), Cub Swanson vs. Artem Lobov (UFC Fight Night on April 22) and Will Brooks vs. Charles Oliveira (UFC 210 on April 8). The Swanson vs. Lobov booking is a bit head-scratching considering the former's surging stock in the featherweight division, but I guess this goes to show the power of trash-talking. Should be a slobberknocker, regardless.

-Dana White announced that UFC 208 is a sellout with a gate of over $2 million, per ESPN.com's Brett Okamoto, making it the highest-grossing event in arena history.

-Both Ian McCall and Jarred Brooks will receive their show money after their fight was scrapped at the eleventh hour, per Sirius XM's Luke Thomas.